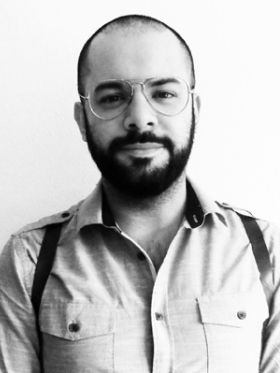 Born in 1981 in Como, Filippo Mambretti attended “B. Luini” Artistic High School in Cantù (CO). During his High School’s years, he met Bruno Munari, and, thanks to this encounter, he started to design. Later, he obtained two degrees from Milano Polytechnic University (Furnishings design and Furniture design). Mambretti started his professional life at Italo Rota’s office in his last year at Politecnico (Polytechnic). After that, he cooperated with Francesco Murano at MayDayDesign and Spheradesign offices.

In 2008, he founded his office MakiStyle where he practiced innovative steps, revolutionary communications and projects. Mambretti left MakiStyle in 2010 and, in 2011; he joined SpheraDesign as a working partner. He is a teacher and professional in product design and interior design and the winner of numerous design awards professionally, including Infiniti Design Contest 2011, Castelli Design Contest 2012 and Autoprogettazione 2.0. Apart from his devotion to teaching at the SSS_AA, the CSIA and the Polytechnic of Milan, Mambretti cooperates with various institutions in the field of industrial product design and architectural design as the head the Mambro Design Studio based in Chiasso, which works actively in Switzerland and throughout Europe.