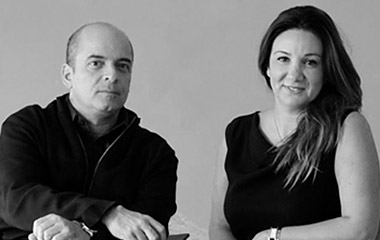 After completing his secondary education at Istanbul Erkek Lisesi (Istanbul High School), Murat Tabanlıoğlu, graduated from the architecture Department of Vienna Technical University in 1992. After working with major architects in Vienna, Tabanlıoğlu returned Turkey with the experience he gained and founded Tabanlıoğlu Architects in 1990 with his father Dr. Hayati Tabanlıoğlu.

Apart from his numerous projects with his company, Tabanlıoğlu gives lectures on Architectural Studio in various universities including Bilgi University. Murat Tabanlıoğlu is a Chartered Member of RIBA (Royal Institute of British Architects) and AIA (American Institute of Architects) (Int'l. Assoc.), and has been giving conferences at home and abroad since 1999.

Apart from being a master jury member for the 2013 Aga Khan Awards, he also serves as a jury member in international competitions like AIA and WAF (World Architecture Festival) and in national evaluations.

After Galatasaray Lycee, Melkan Gürsel Tabanlıoğlu studied at the Architectural department of Istanbul Technical University. She completed her master’s degree at the Metropolitan Cataluña Polytechnic University and joined Tabanlıoğlu Architects in 1995. Tabanlıoğlu is a jury member for national and international competitions, gives conferences and is a member of AIA (Int'l. Assoc.).