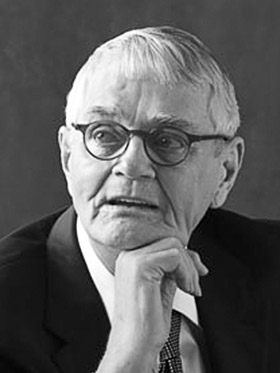 Charles Pollock was born in 1930 in Philadelphia, Pennsylvania. In 1944, he attended Cass Technical High School where he received an extensive education in art and design. While still at school, Pollock started to work at the Chrysler Corporation.

While touring Pratt, industrial designer George Nelson saw one of Pollock’s sculptures and was impressed. Pollock then visited Nelson’s studio, presented the sculpture as a gift, expressing his desire to work with Nelson when he graduated.

After graduating from the Pratt Institute, Pollock was drafted into the Army and was stationed at Fort Benning, Georgia. During his time in the military, Pollock worked as an art director for Infantry Magazine and his painting called ‘Boot’ became the cover. He also taught a series of art lessons on the base for while.

After returning to New York, Pollock started designing products and interiors for Radio City Music Hall’s acclaimed designer Donald Deskey. Pollock then had his opportunity to work for George Nelson. Pollock left Nelson’s studio to open his own studio in Brooklyn, where he could make models and full-scale prototypes. Due to the success of the Swag Leg Collection he designed with Nelson, Florence Knoll took note of his designs. Pollock designed the 657 Sling Chair for Knoll.

Florence Knoll made an investment in the young designer, and Pollock spent the next five years working and developing new products. Pollock continued developing new concepts and products, which culminated in the release of the Pollock Chair for work areas in 1965. The chair was notable for Pollock's patented invention of rim technology and the simplicity of its assembly. When released, the Pollock Chair was an instant success and became a visual symbol of the modern workplace. The Pollock Chair became one of the best-selling office chairs in history and spawned numerous copies over the years. Knoll still manufactures the original Pollock chair.

Knoll retired in 1965, which marked the end of an era in modern design. Pollock subsequently turned his attention to Europe, where he spent many years skiing, sculpting and painting. He continued to devote his life to design, and in 1982, he introduced the award winning Penelope Chair for the Italian company Castelli. The Penelope Chair was a major breakthrough because it was one of the first passively ergonomic chairs produced with simple parts.

Pollock's designs were governed by two principles. Creatively, he favored a continuous curved line when sketching ideas and creating forms. The second principle was that any product must be visually attractive, functional, and affordable. His designs were technically advanced, yet easy to manufacture at a reasonable price. Pollock is the recipient of the IBD Bronze Medal Award, the Dutch Institution for Industrial Design and Pratt Institute's Excellence by Design Award. His work is exhibited in many museums around the world.